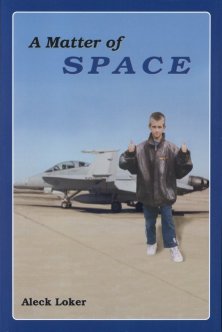 More Details:
Aleck Loker has written a novel that blends his love of science, engineering, history, and archaeology that readers young and old will enjoy. This story plays out on the waters of the Chesapeake Bay, the Patuxent River Naval Air Station, and Historic St. Mary's City, Maryland.

Readers will find an accurate portrayal of Navy flight-testing, fictionalized for sure, but clearly describing the way test pilots and technical staff balance this high-risk work with careful preparation and constant review.

Paul Melton, the hero of this adventure story, is a student at Esperanza Middle School, with the usual interests and issues to which we can all relate. By accident, Paul becomes swept up into the Navy's recovery, analysis, and ultimately flight test of a strange craft that has intruded into their airspace. Paul becomes an integral part of the test team and saves the day, earning the respect of the engineers and pilots, who call him a "true professional" –their highest accolade.

In the second part of the book, Paul experiences strange flashbacks in time that take him to St. Mary's City at the time of the founding of the colony. Paul again faces danger and proves he has the right stuff–in the process shedding new light on the mysteries of the early colonial period.

ABOUT THE AUTHOR: Aleck Loker is a ninth-generation St. Mary's County, Maryland native who knows and loves local history. After graduating from Ryken High School (now St. Mary's Ryken), Aleck attended the College of William and Mary in Virginia where he received a Bachelor of Science degree in physics. Aleck returned to Leonardtown and began a thirty-three year career at the Naval Air Station, Patuxent River, Maryland. In his Navy Career, Aleck achieved recognition for innovative work that was widely published. His collaboration with Naval test pilots and engineers spanned virtually every facet of the work at the air station. Aleck served as the Executive Director of the air station for his last three years with the Navy.

Along the way, he studied local history and published numerous articles in magazines and in the Chronicles of St. Mary's, a publication of the St. Mary's County Historical Society. Aleck's last book-length work was the popular A Most Convenient Place, Leonardtown, Maryland 1650-1950.

His new book, which is his first novel, reflects his strong affection for the important work done by the Navy at Patuxent River Naval Air Station and the equally important work of the archaeologists, historians, interpreters and staff at Historic St. Mary's City.

Aleck and his wife Ann divide their time between Williamsburg, Virgina and Leonardtown, Maryland. He is currently working on a series of children's stories and a biography of Captain John Smith.
Reader Comments