Recently, the following officer was recognized as "Officer of the Quarter" and reflects great credit upon himself and in keeping with the highest traditions of the Sheriff's Office.

Correctional Officer of the Third Quarter of 2004: Correctional Officer John J. Cook began his career in the field of Corrections on December 12, 2004. He completed entrance level training at the Southern Maryland Criminal Justice Academy on June 3, 2004. During his short tenure with the Sheriff's Office, C/O Cook has demonstrated he is dependable, dedicated and loyal. His professionalism is reflected in his appearance and attitude. C/O Cook is positive and eagerly accepts additional responsibilities. In addition to his duties as a line officer, C/O Cook is a member of the Emergency Response Team, a weapons qualified transport officer and is certified on the M26/x26 Taser. His exemplary performance as a team player has resulted in his being named Correctional Officer of the Third Quarter of 2004. 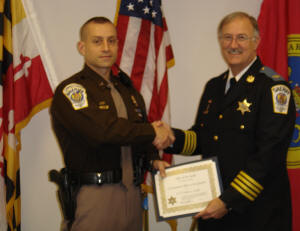