Recently, the following officer was recognized as "Officer of the Quarter" and reflects great credit upon himself and in keeping with the highest traditions of the Sheriff's Office.

Deputy Sheriff of the Third Quarter of 2004: On July 16, 2004, Senior Deputy First Class William E. Hill was transferred to the Patrol Division after being assigned to the Child Support Unit for approximately ten (10) Years. Since his return to patrol, he has been a very motivated and productive employee. His statistics for the quarter are as follows: Reports – 42, Arrests – 19, Juvenile Apprehensions – 3, Citations – 28, and Accidents – 5.

SDFC Hill is an outstanding officer that always represents the agency in the best possible light. He handles all calls in a professional manner and gives one hundred percent effort at all times. His exemplary performance has resulted in his being named Deputy Sheriff of the Third Quarter of 2004. 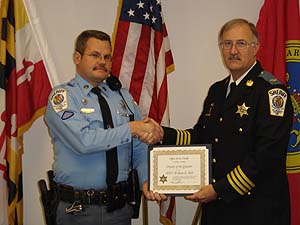