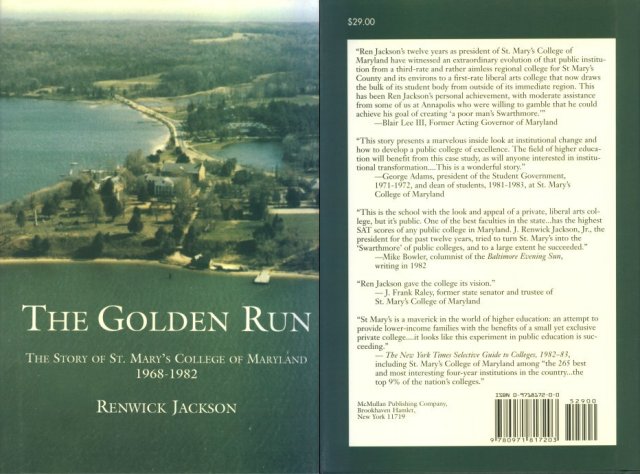 More Details:
From the Jacket flaps:

This is a remarkable story about the transformation of an ordinary public junior college into an excellent, small, residential, public college of liberal education during thirteen years from 1969 to 1982. Since improving the quality of public education has become a national priority, the St. Mary's story is a model of what could happen in every public school and college in America.

Many persons committed themselves in loving and generous ways. It is unheard of that faculty teach without compensation and colleges give academic credit without tuition payments. It happened every year during the winter term at St. Mary's. This extraordinary commitment, expressing a love of teaching and learning, and a freedom from materialism, was a major factor in the success of the college.

The effects of St. Mary's success were far-reaching. A demonstration that an ordinary institution could become excellent challenged other public and private institutions to pursue excellence. Renwick Jackson conceived the idea of a public Swarthmore while planning the development of York College of the City University of New York. He observed that great public universities such as Berkeley and Michigan equaled the excellence of the best private ones but there were no public equivalents of the best small, private, residential colleges of liberal education. This meant that students who lacked the funds to attend such institutions were denied access to that kind and quality of liberal education.

When the experiment at York College failed, Renwick Jackson searched throughout the country for another public college where the mission could succeed. He was invited to be president of St. Mary's College of Maryland, a public college which takes its name from Maryland's first settlement and capital, St. Mary's City.

This is an exciting story about the realization of the democratic dream of America. Often, failure seemed imminent. The roller coaster ride of the adventure-pioneering a new kind of public college, conflicts about liberal education, a quest for excellence, resistance to change, protests against the Vietnam war, struggles for racial justice, drug busts, an elimination of faculty tenure initiated by faculty, and the preparation of citizens and leaders in a democratic society keeps the reader on tenter hooks and makes success all the sweeter."