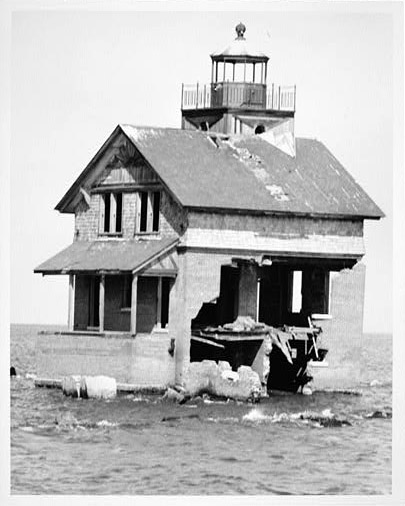 More Details:
The following press release was issued by the NAS on October 25, 1996. It provides a good history of the lighthouse.

NAS PATUXENT RIVER, MD -- What remained of the Cedar Point Lighthouse was salvaged last week and delivered to Calvert Marine Museum. In place of the century-old crumbling lighthouse, a radar reflector now stands.

Through the haze of the early afternoon, a large crane lifts the old Cedar Point Lighthouse wooden structure and roof intact for a trip on a barge up the Patuxent River to the Calvert Marine Museum.

"It was a lack of funding for restoration and the impending collapse of the structure that prompted the salvage effort," said Captain Elmer Standridge, commanding officer, Naval Air Station Patuxent River.

Concerned that it could become a possible navigational threat, station officials in January contacted historical societies, environmental groups and the public to form a partnership to preserve what was left of the lighthouse complex. Calvert Marine Museum officials asked for the remnants - the gabled roof and bricks.

In March, the station's Restoration Advisory Board, an environmental advisory board, was briefed and reached a consensus that the remains of the lighthouse should be taken down. NAS, however, did not have the contract vehicle necessary to administer the salvage effort, said Nancy Rogers, facilities planner with Public Works.

"Skip Simpson, a contractor with Compliance Corp., was instrumental in getting the mechanism in place which enabled this to come about," Rogers said.

Simpson connected with Terri Regin, with the East Coast detachment of the Naval Facilities Engineering Service Center (NFESC). NFESC had the expertise and contracting vehicle already in place to get the job done in a short time, Rogers said. The contract was awarded to VSE Corporation, Alexandria, Va. NFESC administered the contract and sent their engineer, Warren Bartell, to manage the project.

During the week of Oct. 7, the contractor installed the bracing and supports that would allow the crane to lift the wooden third floor and roof structure intact off the lighthouse.

On Oct. 17, the slate-covered roof structure was lifted off in one piece, placed on a barge and delivered to Calvert Marina by 9 p.m. that night.

Most of the bricks were not able to be recovered because they were held together by concrete and could not be separated without destroying them, Rogers said. However, the contractor was able to recover bricks from the chimney inside the structure. One corner section of the lighthouse also was salvaged intact, removed and delivered to the marina.

Calvert Marine Museum plans to dismantle and inventory the remnants. Museum officials hope to use as much as possible to construct a pavilion with a Calvert County grant.

Above the water line, all that remains of the lighthouse is the rock foundation that surrounded the complex. The rocks will remain in hopes of preventing further erosion in the area.

Throughout its stewardship of the lighthouse property, NAS officials have sought to oversee its historical and cultural heritage responsibly.

Toward that goal, Navy officials offered the Cedar Point Lighthouse cupola to St. Mary's County to use as a landmark or centerpiece for the proposed Lexington Park "Sound of Freedom Town Circle." The cupola is on display outside the Naval Air Test and Evaluation Museum on station.

However, the possibility of moving the cupola to Piney Point Lighthouse Museum came as a surprise to NAS officials when they read about it recently in a local newspaper.

The Lexington Park Master Plan draft proposed a "Major focal point, create a traffic circle at the new intersection of Tulagi Road and Shangri La with a landmark in the middle. Perhaps a statue relating to the Patuxent River Naval Air Station or perhaps the cupola from the Cedar Point Lighthouse."

The county's first choice for the circle was an airplane, but Navy officials said no, however, placing the cupola in the circle was an option. The Navy's first formal commitment was in a letter to St. Mary's County Qfficials saying, "The Navy will assist in transferring the Cedar Point Lighthouse cupola, located at the Naval Air Test and Evaluation Museum, to the proposed location."

"The base agreed to give the cupola to the county in support of the Lexington Park Master Plan. We never promised it to the county for any other use," said Tim Smith, NAS executive director. "Any other movement has never been discussed or agreed to."

However, county officials were under the impression that station officials had "donated" the cupola to the county.

In a recent letter from the St. Mary's County Commissioners, the commissioners thanked the Navy for its "generous gift ... The county's immediate plans are to relocate the cupola to the Piney Point Lighthouse Museum and Park ... As part of Lexington Park's redevelopment plan a determination will be made later as to the feasibility of featuring the structure as a historical landmark in a Lexington Park town circle."

Unaware of any such commitment, Standridge explained that the extent of the station's commitment was to use the cupola as part of the Lexington Park master plan, which the county has yet to approve.

"The conditions have changed, and if the conditions change, we need to discuss it," Smith said. "We also need to look at what is in the best interest of the artifacts themselves."

Historical records show that in 1894, the U.S. Coast Guard bought an acre-and-one-half of land on the point at the entrance to the Patuxent River for the lighthouse site. The lighthouse complex was operational in 1896.

"We feel it is the Navy's responsibility to keep the cupola somewhere in the vicinity of where the lighthouse stood for the last 100 years," Smith said. During recent informal briefings, Smith and Standridge have suggested the cupola be moved to the Calvert Marine Museum, where the rest of the roof and the bricks are.

The Navy, however, is in no hurry to move the cupola. The cupola does not have to be relocated from its present site for another two years - when Route 235 is scheduled for widening, Smith said.

In the meantime, Standridge has told county officials that the Navy will store the cupola on station until the county develops its Lexington Park plan.

But if that doesn't happen within a reasonable time frame, the Navy will look at other alternatives.

1894 - The U.S. Coast Guard (USCG) buys 1.54 acres of land on the point at the entrance to the Patuxent River for the lighthouse site.

1928 - USCG abandons lighthouse and sells all but a 10-by-10-foot plot for the Day Beacon to Arundel Sand and Gravel Corporation. Water now surrounds lighthouse.

1933 - The Day Beacon is destroyed by storm, another beacon is installed in old fog-bell tower owned by Arundel Sand and Gravel Corporation.

1954 - Day Beacon is removed because of erosion and nearby dredging for sand.

1 September 1983 - Lighthouse is removed from National Register of Historic Places Listing of "eligible, not yet listed."

24 May 1984 - The cupola is dedicated and presented to the station's Naval Air Test and Evaluation Museum.

11 January 1996 - Navy sends press releases and letters to relevant historical societies, environmental groups and the public to "form a partnership to preserve what is left of the 1896 lighthouse complex."

26 March 1996 - After being briefed, the Restoration Advisory Board reaches a consensus that the remnant of the lighthouse should be taken down.

7 October 1996 - A small crane is used to install hardware to assist with removing the wooden structure and roof intact.